Despite its main role as a port, Marchwood only received around 50 vessels on average over 2019/2020. Under the proposals
this is expected to increase to around 200 vessels.

The port is connected to the national rail network and currently has three train paths a day (slots reserved in the wider railway timetable). These are not currently fully utilised.

With the increased use of the port, we anticipate greater use of the existing rail path. However the port will continue to operate within the existing permitted rail capacity.

Rail will also continue to be used where possible to move cargo around the port.

A new access off Cracknore Hard will bring vehicles onto the port before they stop at security, which will prevent queuing on the road. In order to calculate the number of
vehicles that will come to and from the port, we have created a traffic model based on the anticipated uses. We have also taken into account the impacts the lockdown will have had on our surveys in 2020/21. More information on this and the modelling can be found here.

The current and future HGV movements to and from the port are detailed below:

As happens now, the vast majority of these will continue to be within normal working hours.

When completed the finished port, at capacity, is expected to generate an average of 49 HGV movements an hour and 685 HGV movements a day. As happens now, the vast majority of these will continue to be within normal working hours.

In addition to HGV traffic, the completed port will result in some additional light vehicle traffic associated with the creation of new jobs on the site. Employee related traffic is expected to increase from around 100 vehicle movements in the busiest hour of the day to around 200 vehicle movements.

The proposals will encourage sustainable transport to and from the site and will provide:
•  A new footpath connection from Cracknore Hard, west on Normandy Way to link to Autumn Road.
•  An extension to the cycle route from Bury Road (at Corks Lane) to the entrance to the site.
•  A new site-wide Travel Plan that will encourage those working on or visiting the site to cycle, walk or car share where possible.
•  Should the reopening of the Waterside Passenger Railway go ahead, along with a new station at Marchwood, it is possible that staff could use this as a way to commute to the port and SGL would support this through the site-wide Travel Plan.

The junction of the A35 / A326 roundabout is currently operating over capacity and the increased traffic generated by the port will impact this junction. The approved Fawley
Waterside scheme has proposed, modelled and agreed to contribute towards an improvement here. Hampshire County Council (HCC) is now progressing updated plans to implement an improvement scheme at the junction through its successful bid to the Transforming Cities Fund.

Our studies show the emerging HCC plans are also able to accommodate the additional traffic expected from Marchwood Port. A number of comments were made in relation to the poor quality of the road surfaces surrounding the port that could impact the safety for users and also noise for local residents. SGL does not have the authority to re-surface roads, this responsibility lies with the County Council as the Highway Authority. SGL will do all that it can to encourage the Highway Authority to maintain the roads to a high standard. 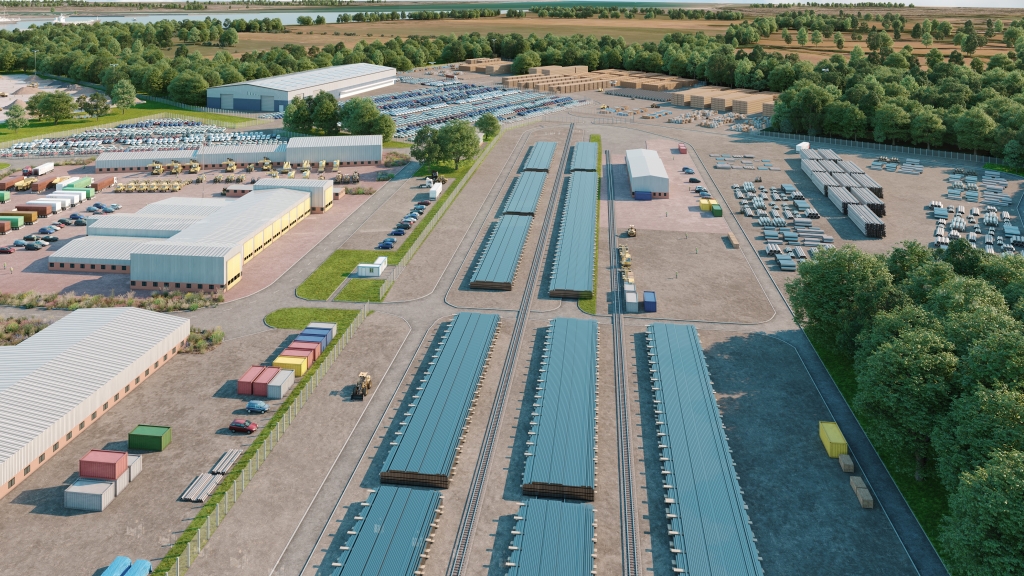 Marchwood Port is accessed via Cracknore Hard and a new entrance will be created as part of the proposals. This will include:

As such, we are proposing a signed route between the port and the strategic road network that diverts and manages traffic around Marchwood Village.